We’ve created the Series Rules & Scoring, but we’d really like everyone to know what we’re trying to do with this racing series as we hope that will make sense of the rules. We may not always have it right either, and we’re open to improving ahead of a main series later in the year, so constructive feedback is always welcome!

One fundamental thing we’ve learned from racing at the top and bottom of categories … is that it’s more fun if you can contribute! So we’ve tried to keep this at the core of the DIRT Racing Series.

There will be no DQs for teams just because life gets in the way, if one rider is all that can ride, then that’s OK!

Nice and simple – up to 8 riders and it’s the time of your 4th rider that crosses the line. If you end up having to race as a 3 or even a 2 – then chapeau to you for doing it and if you request it (and as long as we’re comfortable that your competitors couldn’t perceive that this was for advantage) then we’ll look to instate a time for you.

So here’s how it works.

70th and below gets 2 points. Every position higher gets 1 extra point. And then there are cumulative steps up at 50th, 20th, 10th, 3rd, 2nd & of course 1st. Full points table can be found in the Series Rules & Scoring. 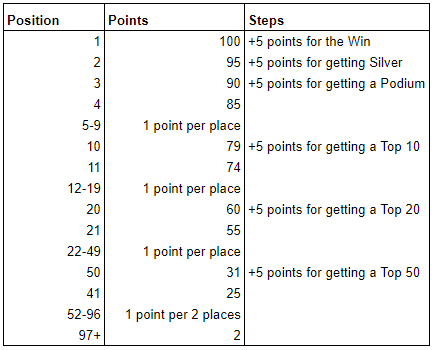 We hope that in the DRS there will be different racers getting the bonus points compared to those who win the race. Which is why we will have Fastest Through Segment and First Across the Line, but with balanced scoring (where most of the weight is on Finishing Points). There’s also a fresh chance every lap for FTS and FAL in multi-lap races.

We think that will best balance out who can contribute in the teams and allow Sprinters & Climbers to play in their own competition in parallel. Oh, and we hope Sprinters and Climbers will still push for finish points as well because they are still so valuable all the way down the field!

There are even Fastest Through Segment in the iTT where there’s no draft so it will not only be the race of truth but the Sprint and Climb of truth too. We’re looking forward to seeing how that pans out!

Don’t wait any longer, join in on the fun and register now!

If you have questions or are in need of riders for your team, join our Discord channel.

When you visit any website, it may store or retrieve information on your browser, mostly in the form of cookies. This information might be about you, your preferences or your device and is mostly used to make the site work as you expect it to. The information does not usually directly identify you, but it can give you a more personalized web experience. Because we respect your right to privacy, you can choose not to allow some types of cookies. Click on the different category headings to find out more and change our default settings. However, blocking some types of cookies may impact your experience of the site and the services we are able to offer.
Necessary Always Enabled
Noodzakelijke cookies worden ingezet om de werking van onze website te kunnen garanderen. Zo worden ze bijvoorbeeld gebruikt voor het correct functioneren van formulieren op onze website.
SAVE & ACCEPT